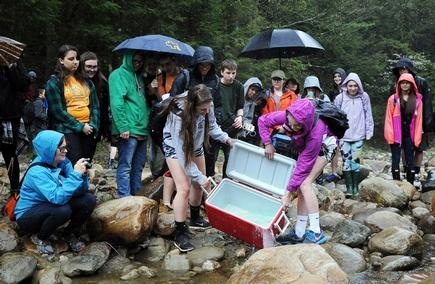 “Would somebody like to hold him?” Tim Gilbert asked a group of Rutland High School students, holding a stonefly larvae in his hand Friday at Clarendon Gorge.

There weren’t any takers, but the group crowded a little closer to get a better look.

A retired science teacher from the high school, Gilbert told the group about the stonefly’s life cycle — and the many exoskeletons it would shed along the way.

“You might find some of their exoskeletons lying around,” he said.

He noted that stoneflies, like black flies, were highly desirable: because they were intolerant to pollution, their presence in a stream typically indicated its cleanliness.

“If you’re getting bit by black flies, at least you’re around some good water sources,” he said.

It was a theme the students would return to many times that day — a single creature and the manifold things its presence and health could say about the interconnected world it inhabited.

Through Trout in the Classroom, a project of conservation group Trout Unlimited, Rutland High students raised trout eggs into fingerlings — juvenile fish — in a tank in the back of their classroom. Monitoring the tank’s water quality and tracing growth of the fish, the students learned about trout life cycles, the nitrogen cycle and ecosystem connectivity.

As the test tubes turned yellow and blue, the students compared the hues to see roughly — in parts per million — how much nitrate, dissolved oxygen and phosphorus the watershed contained.

“Like carbon dioxide is bad for us, ammonia and phosphate is bad for fish. And we care because we’re releasing a bunch of little guys,” Mercier explained. “We want to make sure the conditions are good for them.”

As rain began to pour in earnest, students gathered around teachers Dawn Adams and Michele Geisler for the day’s penultimate event: a poetry reading.

“Oh my brook trout, so small and fragile / Salvelinus fontinalis / That is your name / Well, your scientific name,” began one poem.

Another poem looked back — with humor — at the trouts’ difficult journey from Rutland High to the Clarendon stream.

“Beautifully brown / Remember when they got sucked into the filter / Only a few survived / Oh wow that was sad,” it started.

The group then trudged back to the water, and, with a cheer, released the young fish.